Truss’s bailout could add around £200 billion of extra gilt issuance over this fiscal year and next, according to Deutsche Bank AG (NYSE:). That’s unwelcome news for a market already grappling with the fastest pace of inflation in 40 years. The UK central bank has signaled it will act “forcefully” to curb prices by tightening monetary policy.

“I think the quantum of extra debt, the greater risks around the twin deficits will mean higher yields further out,” said Howard Cunningham, a portfolio manager at Newton Investment Management. “The energy price cap is likely to lead to lower headline inflation, but more persistent core inflation because consumers will keep spending.”

He sees 10-year gilt yields rising to around 3.5% from about 3% currently. They’ve already increased 1.3 percentage points from the beginning of August.

Money markets responded to Truss’s program by dialing down short-term inflation expectations but also anticipating that interest rates will remain elevated for longer into 2023. Traders are wagering on just 15 basis points of cuts from June to December 2023, as opposed to around 25 basis points of cuts in the last month.

The BOE delayed its next rates decision a week until Sept. 22 after the death of Queen Elizabeth II, giving policy makers more time to analyze the Truss energy plan as well as key data on jobs and inflation due out next week.

Economists from JPMorgan (NYSE:) Securities, BNP Paribas (OTC:) and Credit Suisse (SIX:) already are anticipating the BOE will deliver a 75 basis-point increase in the base rate to 2.5% this month. That’s on top of the half-point rise in August, the biggest boost in 27 years.

Policy makers have two conflicting forces to assess in the coming months. Truss says that her plan to freeze energy bills will shave up to 5 points off the headline inflation rate, which economists surveyed by the Treasury estimate will peak around 15%. The concern is that cushioning consumers now will add to strains in the economy and push up prices later.

“Recent measures lower short-term inflation and may reduce the urgency from the BOE,” said Rohan Khanna, rates strategist at UBS. “But that may mean more stickier inflation as purchasing power gets hit less than previously thought, hence less easing after a peak in rates.”

Higher rates in financial markets and from the BOE would add to the strains facing consumers, who are struggling with the worst squeeze on their spending power in a century.

The timing of the BOE’s next decision adds to the complexity of the assessment. Policy makers were to meet on Sept. 15, before Chancellor of the Exchequer Kwasi Kwarteng plans to deliver more detailed estimates of the cost of the Truss energy package. By delaying a week, it’s possible the BOE will now decide on rates after seeing those estimates.

The BOE also was planning to use this month’s meeting to confirm sales of some of the bonds it built up during the years of quantitative easing, when it amassed £895 billion of assets to stimulate the economy. Those sales now may crash into Kwarteng’s own fund-raising plans.

“This will mark a huge step change in net gilt issuance that will clash with Bank of England quantitative tightening and hikes,” wrote Citigroup (NYSE:) strategist Jamie Searle in a note to clients.

NatWest Markets UK rates strategist Imogen Bachra is envisaging a “regime shift” for gilts due to these headwinds, forecasting 10-year gilt yields hitting 4% by year-end. Gilts could also suffer from the faltering demand from pension funds and foreign investors, according to HSBC.

A remark earlier this week from BOE Chief Economist Huw Pill that the Truss plan would cut inflation in the immediate term was interpreted as a dovish sign and led to a surge in two-year gilts. But that’s balanced by the BOE’s ambition to return inflation back to its 2% target quickly.

“The Bank of England will likely still feel under immense pressure to prove its commitment to returning inflation, and a 75 basis point rate hike next week is a very real possibility,” said JPMorgan Asset Management global market strategist Hugh Gimber. 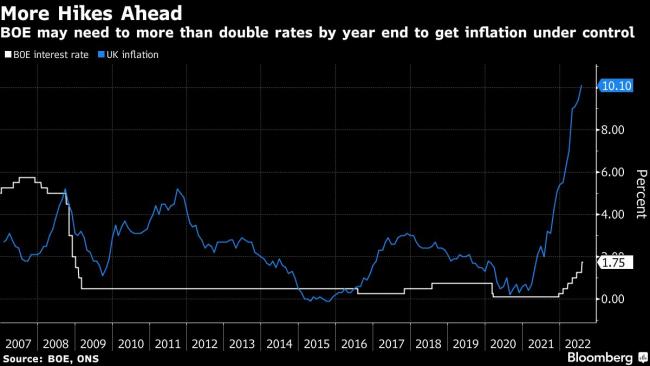