MOHAMED ELNENY and Marquinhos have given Arsenal a double fitness boost.

But Oleksandr Zinchenko and Gabriel Magalhaes face fitness tests as the Gunners bid to return top of the Premier League with victory over Nottingham Forest on Sunday.

Elneny is back in training after injury in September ended his bright start to the season.

The Egypt midfielder, 30, had shone standing in for Thomas Partey.

And although he’s unlikely to play a part this weekend he’s expected to be ready for action soon.

Brazilian winger Marquinhos, 19, is tipped to be back in the squad after missing Thursday’s 2-0 Europa League defeat at PSV Eindhoven. 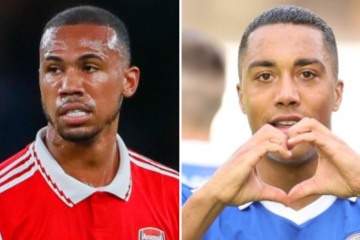 But most of the fitness focus is on in-form duo Zinchenko and centre-back Gabriel.

Zinchenko will expect to replace Kieran Tierney at left-back if he’s 100 per cent.

And boss Mikel Arteta hopes to bring back Gabriel alongside William Saliba in the centre of defence.

Arteta will make changes anyway, especially as he was shocked by the slump in performance in Holland.

He said: “I’m very disappointed. It’s the end of a long run, where we won a lot of games… and we have to reset.”

The Spaniard was particularly frustrated by the Gunners’ poor build-up play.

“We gave so many balls away, which allowed so many transitions, which was what they were looking for whenever they got in the right structure.

“They were on top of a lot of things that last week was different.”