MANCHESTER UNITED midfielder Fred has jumped to the defence of his teammate Antony after the winger was criticised for showboating.

Antony, 22, was mocked by pundits when he attempted his signature spin midway through United’s Europa League clash with Sheriff on Thursday.

With nobody around him, the Brazil international completed two spins with the ball at his feet before passing it out of play.

United boss Erik ten Hag wasn’t best pleased with the trick either as he hauled the former Ajax star off at half time. 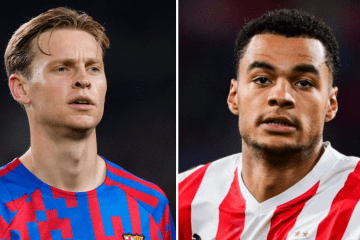 But, Antony has vowed to continue showboating despite the criticism.

In a statement on Instagram, he wrote: “We are known for our art and I won’t stop doing what got me where I am!”

Man Utd midfielder Fred has since defended his teammate, stating that it’s “his game”.

When speaking to ESPN about the reaction, he said: “It’s very annoying that they want to say that.

HOW TO GET FREE BETS ON FOOTBALL

“I think it starts with us being Brazilians. Brazilians have quality in their blood. It’s always been that way since Pele, to have quality, to dribble, to score, to dance, to smile.

“So I think people have to understand this aspect that we have. So it wasn’t offensive to anyone what he did.

“Of course, if it’s offensive, we’ll come to him in the dressing room and talk. But it was not offensive to anyone. It’s his game. I think he has to keep doing it.

“I think those who have quality have to show it on the pitch there. If you want to control differently, you can control.

“You want to do a spin that he likes to do, you have to do it. Dance, you can dance. As long as it’s with respect to the opponent, obviously.”

Man Utd went on to win the Europa League clash 3-0 thanks to goals from Diogo Dalot, Marcus Rashford and Cristiano Ronaldo.