LIONEL MESSI scored a screamer as Paris Saint-Germain defeated Troyes in a thriller.

The Parisians came from behind twice to win the match 4-3 to extend their lead at the top of the Ligue 1 table to five points.

With PSG behind 1-2 as the hour mark approached Messi received the ball from Sergio Ramos, took two touches to steady himself before firing a shot in from 25-yards.

Messi, 35, lifted both arms into the air and roared in celebration to the delight of the home support and his teammates.

Christophe Galtier’s side started the game slowly and found themselves behind when Mama Balde scored after just three minutes.

Carlos Soler drew the hosts level before Balde netted again leaving fans nervous that their unbeaten run that has lasted all season was going to end. 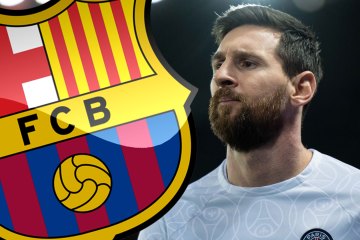 But Messi then turned on the magic with his goal levelling the match and the Argentina international then set up Neymar as PSG went ahead for the first time in the game.

The eight-time Ballon d’Or winner dropped deep to receive the ball and carried it forward before playing an-inch perfect through ball to Neymar and the Brazilian finished calmly.

Kylian Mbappe scored a penalty to seal the win before Ante Palaversa scored late on for Troyes to set up a tense ending but PSG survived.

Messi gained the plaudits after the match as fans were once again dazzled by another man of the match display.

One fan said: “Amazes me how people think [Cristiano] Ronaldo is better than Messi – he’s not even close to him.”

Another reacted: “He has always been and will forever be the GOAT.”

Messi’s latest goal and assist takes his tally for the season up to 11 goals and 12 assists in 16 matches in all competitions.