Just days after being hit with a penalty for breaking F1’s cost-cap, the Dutchman provided the perfect boost to his Red Bull team.

Hamilton had topped both Q1 and Q2 and it was looking like a hat-trick as he went into the final session.

Sergio Perez drew first blood to bring thousands of fans to their feet while he was soon leapfrogged by Verstappen, who took provisional pole.

Hamilton’s time was only good enough for third – but he then had it deleted for exceeding track limits by the picky stewards.

He then radioed his Mercedes team saying he had “driveability issues” with the “power dropping out”. 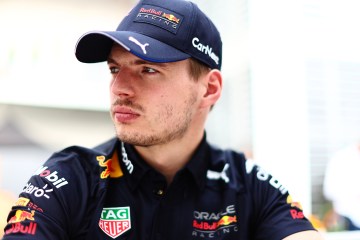 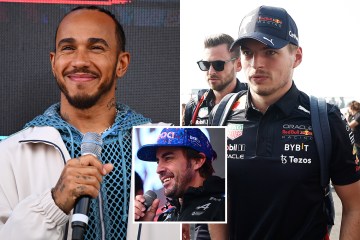 But Hamilton later said: “We were not quite good enough and Red Bulls are so fast but this is the best qualifying we have had this year and it just shows that perseverance and never giving up can pay off.

“Generally my laps have been really good and on he last lap there is more in it and I am happy with that position.”

Verstappen then went even quicker to cement his place in P1 while George Russell qualified in second and Hamilton was third marking the team’s best qualifying performance of the season.

World champ Verstappen said: “It was a good qualifying! It was a close one, and to be on pole again is amazing.

“After FP3 we made a few adjustments and got the car into a better rhythm.

“We have a quick race car and I am sure it will be a fun race. It will be close and depends on what you can do with strategy.”

But Russell felt Mercdes were unlucky.

He argued: “The team deserved more today. They’ve produced a really great car this weekend and testament to them and the hard work they have been putting in.

“This weekend, it felt like our pole to have and I did a terrible lap at the end. But there are no points in qualifying and glad to be on the front row.”

Perez will start in fourth while Carlos Sainz qualified in fifth ahead of Valtteri Bottas and Charles Leclerc while Lando Norris will start the race in eighth.

Daniel Ricciardo failed to make it into the top 10 and qualified down in 11th place in his McLaren.

Mick Schumacher, who has been put under pressure by his Haas team and told he needs to score points if he wants a new deal for next season, qualified down in 16th place.

The German risks being shown the door after a number of expensive crashes for the team to leave his F1 career hanging in the balance.

He was given the boot at the first hurdle along with Nicholas Latifi, Alex Albon, Lance Stroll and Sebastian Vettel.